It's October and many things have changed. Don't you love Lynne's new buttons?

If you've been following closely you know that I've been working more or less on one change/project only: the move. The last leg in our old flat was extremely stressful and left me close to a mental breakdown. The moving company came with a too small car, despite having a larger one, and tried to talk me into giving up our huge filing cabinet - the filing cabinet that is extremely useful and therefore important for my teacher husband. The workers kept on moaning about how much stuff we own and the weight of the boxes and how more things might not fit in. Why did I ever bother having one of their colleagues over to evaluate the space our belongings would need?

They took five(!) hours to get everything out of our apartment and, apart from the filing cabinet, into the car because they had to display some seriously mad Tetris skills on the way. I felt sick peeping into the loaded back. Thankfully I had my sister and friends with me who kept on cheering me and took care of painting the kitchen.

At least I've been promised that the filing cabinet will be delivered with the next transport - whenever that may be. I'll call them again tomorrow. They finally arrived at our new place at 8 p.m. and my husband and sister-in-law did a lot of carrying because they'd only sent down two instead of three people because I'd said the flat would on the ground floor. Well, I distinctly recall talking to the foreman about "one flight down to the basement" an his feeling of relief. Further, it's stated on the contract. Yeah, iffy. Apart from that a mirror cracked and my dresser appears to have suffered a few scratches - of more I don't know because my husband is unpacking only the basic things he needs right now.

Now, I don't mind something breaking. It's bound to happen on any move, especially on this scale. On top of everything else, however, it's extremely annoying. I'll warn everybody I know off this company! I wish we didn't have to move on a budget. It's beyond sucky. But let's stop dwelling on these stressful things now that I've vented once more.

My favourite project of October will have to wait a little until it's completed but I'm ever more in love. 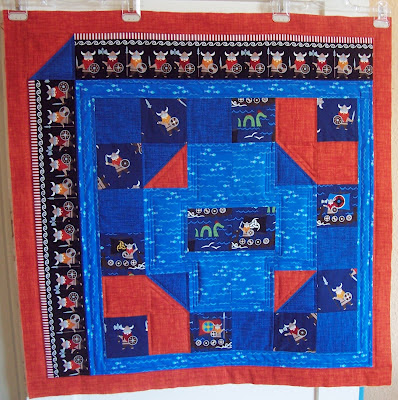 Happy and sad at the same time - it's pretty much half time for me and the husband and our separation. The tickets for my move on the 20th are booked. Granted, it's still a lot of time but from now on it's not only getting less but also feeling like it. It feels good to know when I'll be back with my love (and my other love the sewing machine, too).