Skirt Update of the Quick and Short Kind

As I'm not going to finish this in time for TGIFF I can post my skirt update just as well tonight. Skirts always look a bit boring on a hanger but please bear with me. I'll try to deliver a "worn" picture as soon as possible. 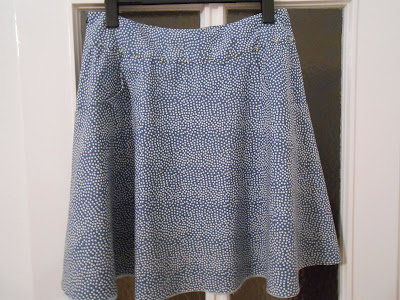 A few more things need to be done, like sewing down the yoke inside (hence the pins), prettifying the side seam allowances and, of course, hemming by hand. The pockets are all done, though. 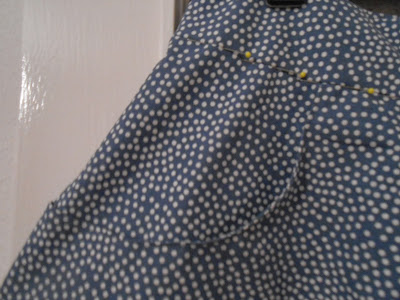 Yay, another skirt with pockets - so useful, especially when you're someone who often doesn't know where to put her hands.

Serious progress has been made on the layout front this weekend. First of all I put a lot of squares aside, all the wood and sky themed ones, and focused on the plants and sea creatures. 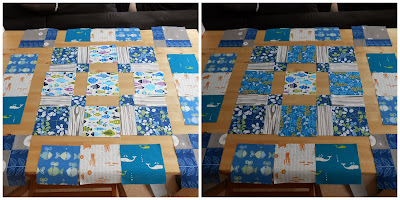 I sewed up two nine patches, cut them up and got working around the resulting blocks. The gaps will be filled with either a print or a solid but first I need to figure out whether I'd like the centre piece to be really fishy, har har, or surrounded by plants. I'd hoped the pics would help me to figure it out but I'm still not entirely sure. What's your take? 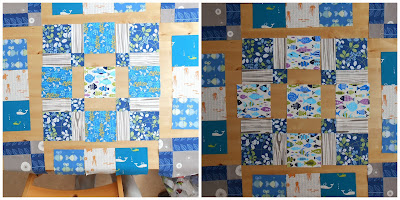 Either way, I'm pleased with the route this is taking and confident to be able to send it off in time for the expected January arrival of my UK-based friends.

With that I'm off to a Sunday dinner with friends. Last time I made two large lasagnas but this time around I'm responsible for dessert and have made a walnut cranberry cake tweaking this recipe by making double the dough and replacing the pecans with walnuts since I couldn't find any pecans on my shopping trip. 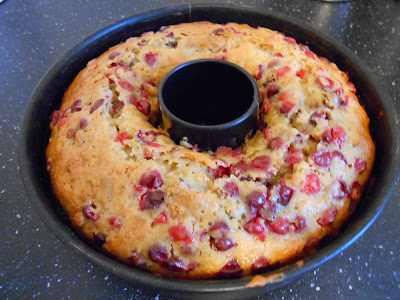 Hopefully it'll taste as nice as it looks and smells!

You Guessed It - More Knitting

So, after my last post, you've come here expecting to see my shiny new skirt? Maybe even a picture of me actually twirling around in it? Meh, I thought so. Alas, I have to let you down, sewing wasn't on the cards this weekend.

Instead I took up knitting my sister's scarf. The yarn is doing its best to drive me crazy. Well, technically that's not true but I'd rather blame the yarn than my attention span for requiring five attempts to start this thing. I kept on twisting my work when joining it in the round and only realised this after at least two rounds each. Boo. Such a waste of perfectly good time! Anyway, now that my brain the yarn's decided to behave I'm making good progress and am a little stunned how different it looks in these colours. 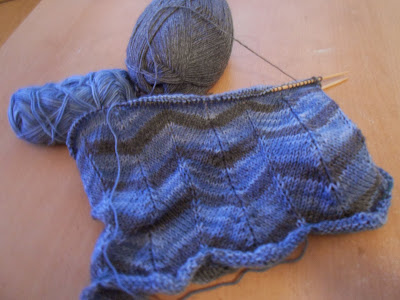 It's been a while since I played with the grey and blue squares. Originally I'd meant to make a second quilt for my nephew (still cute a s a button, I can assure you) but then life happened - as it does - and I struggled finishing quilt number one so I put the squares aside. However, good friends of mine are expecting their firstborn in January and this imminent arrival of another wee little boy is a great opportunity to finally turn them into something special. So I'm back to playing with the layout. 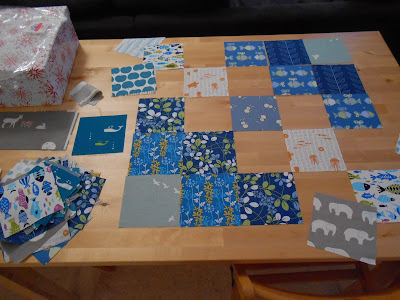 In not totally unrelated news, my laptop's graphics board is playing up and keeping me offline a lot but I hope that the husband can fix it soon-ish and I'll probably catch up with you during a lunch break or two this week.

...included hilarious attempts to make cake pops with my sister & Indian takeaway on Saturday, relaxing with the husband & homemade roast duck on Sunday, and this... 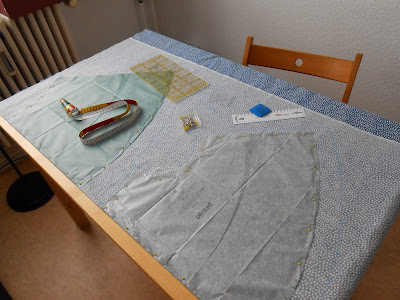 As planned I cut the pieces for my skirt. Success! Even though I didn't actually sew a stitch, I did iron interfacing to the yoke and am ready to start sewing any minute now. Well, I might assemble the yoke and the pockets on a good evening during the week but most of the work will be kept for the weekend. No need to rush and repeat stupid mistakes like this. 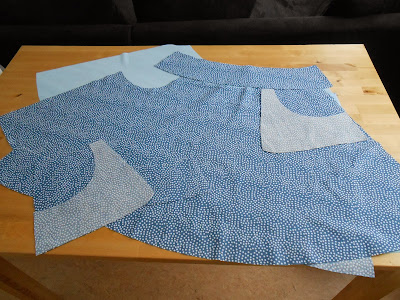 Intense knitting was also part of my perfect weeked. I still have to weave in the ends of all the balls of yarn inside but it's finally time to learn how to merge the ends and turn the whole thing into a loop. The pattern does link to a tutorial which I've not yet bothered to look up. Risky to start a pattern without having internalised all the know how? Maybe but I'm positive I'll be fine. 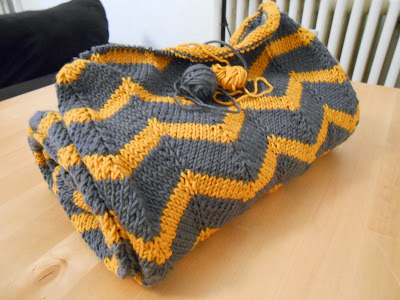 I'm glad that my weekend included more crafty things than the last few. I think I'm slowly getting back into managing a proper dose of hobbies into the work and household chores routine as well as seeing friends and family. How was your weekend?

I hope you're not yet sick of this scarf because I'm more in love by the day. These days it's my only creative outlet, too, filling at least an hour after work and dinner, helping me to unwind. (Work's still going swell and I'm feeling right at home, by the way.) Last night I got to glorious 116 cm! Only 46 cm until the162 cm the pattern calls for. Whoohoo. This close to actually wearing my pretty. 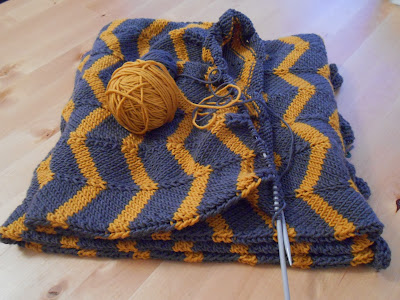 Knitty enthusiasm aside, though, I hope I get to get sewing this weekend. I'd prepped my latest skirt fabric haul Friday last but felt like I might have caught a cold so kept a low profile with lots of sleep and tea, hot baths and cuddles. Still, definitely longing to work with this, I miss the sound of my machine. 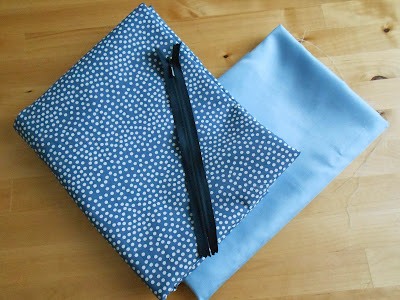 I'm right in the middle of another fabulous week, enjoying the colder but sunny autumn days just as much as working with my new colleagues. I'm also knitting up a storm in the evenings. 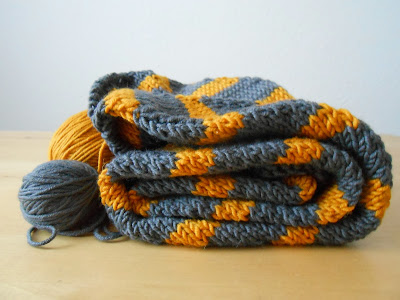 My zig zag loop is now 1.5 the size it was on Sunday and will certainly be double the size come Sunday. 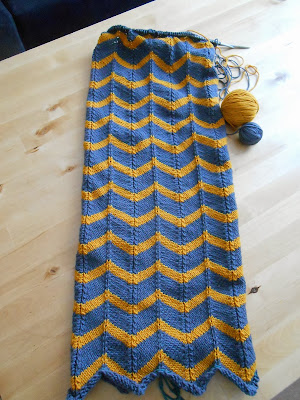 At 65 cm the scarf's more than one third done - I think a finish in a little over a week is highly likely and I'm very much looking forward to wearing this beauty soon.

Anyway, now the husband's off to play footie with his friends after a yummy homemade Schnitzel lunch, I'm going to celebrate The Day of German Unity and my day off by reading your blogs and writing a few long overdue emails. Watch out!