This skirt is the first that I consider a failure though it's looking inconspicuous enough, no? 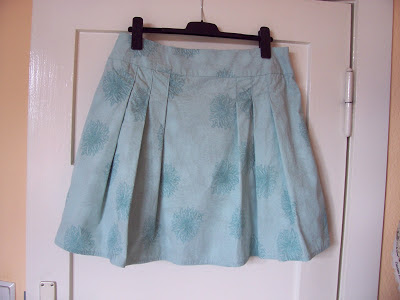 I made it late last spring using the yoke of good old Burda 8176. For the body I mad my own calculations. Having worked with quilting cottons on two previous skirts I felt somewhat safe in my choice. The fabric, however, was a lot stiffer and despite a gut feeling I hoped that once sewn up it'd all fall into place never materialised. 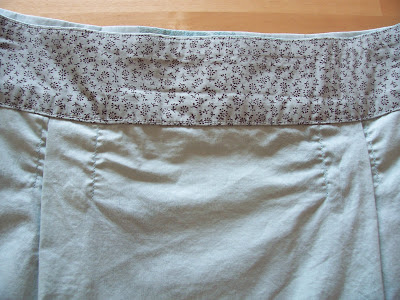 I used some favourite scraps from my first skirt project to line the yoke. You can see a lot of pulling on the pleat seams. It doesn't look as bad in this snap of the right side but it's still present. 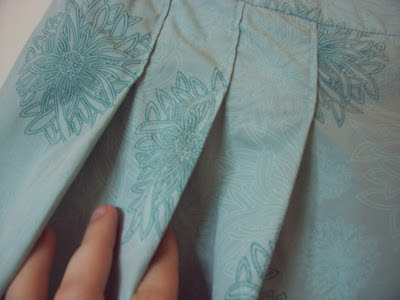 I encountered a lot of trouble handling the fabric. It's a pain to iron, too. Here's a better snap of the disaster, featuring the hidden zipper and yoke. And to think I redid that zipper multiple times as well as trying to fix the yoke. 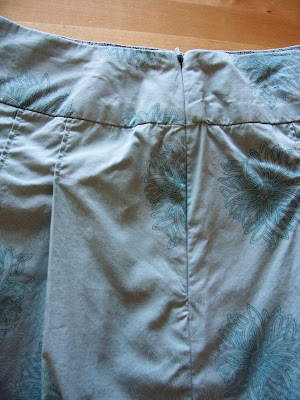 Even the hem decided against playing along and favoured puckering. 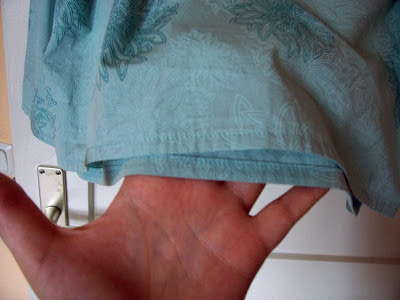 I wore this skirt exactly once because it simply doesn't hang nicely. I washed it several times hoping that'd make some of the stiffness go away but it didn't happen and it certainly didn't make the pulling go away. Defeated by fabric. It's exactly the disastrous project that many fashion sewists will have in mind warning you about using quilting cottons for clothing.

I still like the print but I'm not even sure I'd want it in a quilt because it doesn't have the hand I've got used to. For the moment it will stay in my closet to remind me to trust my gut feeling concerning drape but I might cut it up in the future if the right project comes along. Thanks to my previous experiences it didn't scare me off of using quilting cottons in non-quilty projects and simply became a valuable lesson learnt.

Email ThisBlogThis!Share to TwitterShare to FacebookShare to Pinterest
Labels: skirt, Skirts on Sunday