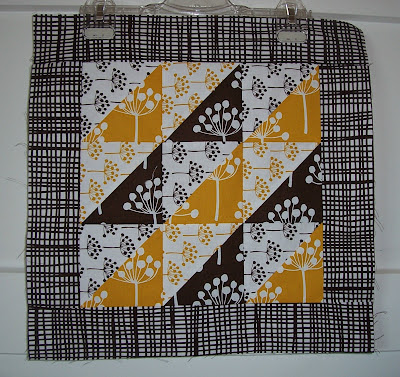 So, of course I somehow squeezed in time to try out HSTs and I'm so happy with them! They're even nearly perfect. Just look at those points. 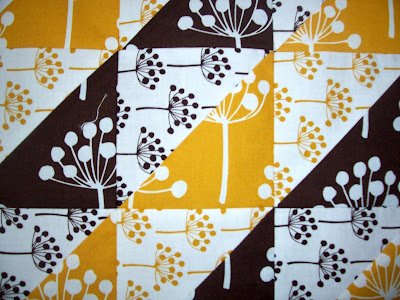 I made two panels which will definitely become pillows, thinking of quilted tops and a simple envelope back in brown - remnants from the table runner - but spiced up with a bound edge. Aren't they pretty side by side? 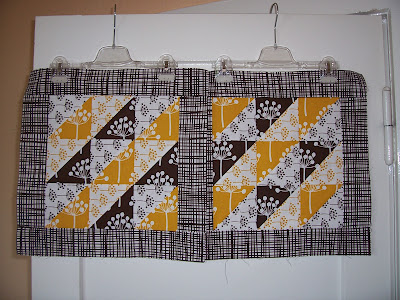 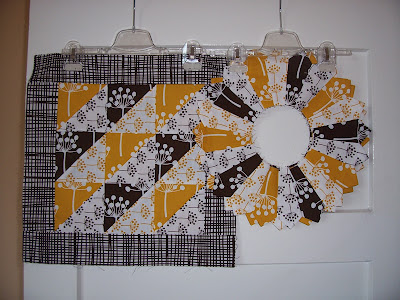 They're also great next to my shamefully abandoned Dresden plates. I'm dead set on turning the three of them into pillows of the same size using the same brown solid, so I need to check whether the store I got it from still has it. That'd leave me with five pillows that work together nicely, although five are way too many for my sofa...

Either way, those HSTs have got me hooked and I've already cut these squares to try quarter square triangles. 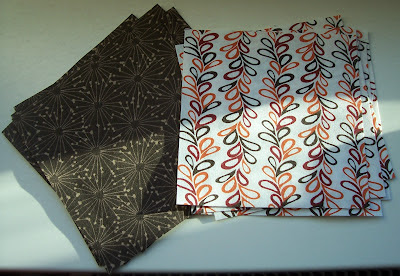 And there's still the Polaroid blocks to turn into pillows, too. And my EEP hexies. Not being allowed to sew/restricted sewing time certainly cannot stop me from lining up small projects for besides and bigger ones for afterwards! Like this which I *must must must* make for my sister's birthday.

Kirby's Dreamland was her all-time favourite Game Boy game. Not sure how I'll take sewing together small squares from mostly the same fabric and pink at that, but there's on big advantage - I have time until late November for it!

My sister has received five pillowcases in the past two years, but I hope she won't tire of them anytime soon. I'd say that each has been better than the one before due to improved and newly acquired skills, starting with envelope style pillows made out of a single piece of fabric and upping my game with zippers, patchwork and quilting. The last one was actually made from our favourite bed linens as children. Our mother wanted to throw them away as they'd worn thin, but I rescued and re-purposed them and some batting and quilting later my sister had a new favourite cuddly pillow.