The One Where I (Nearly) Swear Never to Sew Curtains Again

A couple of months ago my sister showed me a picture of a hotel's window treatment that she'd fallen in love with on her holiday. She asked me whether I'd come across fabric like that. I hadn't but several weeks later whilst windowshopping online I saw something similar. 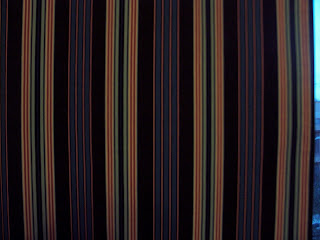 She liked it a lot better than the original window treatment's fabric because it had more brown and less blue. Together we decided to use Kona Cotton Espresso for the backing and ordered 8 1/2 yards each as my sister wanted four curtains. 17 yards of fabric - the horror. The mere sight of the masses of continuous fabric scared me. Knowing I had to cut and wash and iron all that did not entice me at all. Especially the ironing! I've grown used to the need of ironing in sewing but that doesn't mean I particularly love it. I let the fabric sit on my shelf for a couple of weeks before I decided to finally get a start and cut two half yards for the hangers and eight approximate panels for the bodies of the curtains. Those panels went straight back to the shelf but I pretreated the half yard cuts and turned them into 20 hangers. 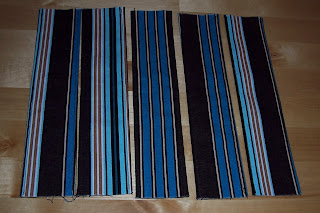 a set of hangers

Then life got in the way and I had no time to busy myself with curtains. I guiltily thought of them now and then, trying to come up with an attack plan because the amount of fabric and ironing still terrified me, until, having regained sewing time from the real world, I finally took action this weekend. I washed two panels on Saturday evening and dedicated most of today's afternoon to create this: 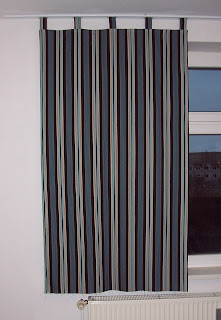 The ironing didn't take up as much time as I'd dreaded but went pretty quickly and smoothly - much much quicker than my prolonged episode of kneeling on the floor trying to pin this mess after I'd cut exact 2 yard panels and trimmed off the selvages. Bleurgh. I was so glad to finally be able to sew after what felt like hours and hours. Then more ironing (of course), more pinning, topstitching, some more ironing (lovely!)... I think it took me 3.5 hours to get to this point. It could've been less if I hadn't been so eager on getting everything right and properly straight. I was determined not to have to use my seam ripper so I took my time.

I put the curtain up to revel in the result and to let it hang a while before hemming it. I think I won't actually hem it until the other three are done, too. That way I can be sure they're all the same length. Not sure when that will be, though. Ninety minutes and a dinner later I feel rather exhausted which doesn't leave me longing to return to this project. I had planned to wash two more panels this evening so I could iron and cut them tomorrow but I just don't feel like it. I really need to get other, non-sewing things done tomorrow and I mean, they're not even for me! *gasp* Given that I'll be working on two quilts soon, I should possibly dedicate the next weekend to finishing two more, though. Simply to have them off the radar. With spring and sunshine approaching my sister will also be thankful to finally have curtains for her bedroom. So I guess I'll bite the bullet of having a non-me-sewing weekend, then. I doubt I'll take on another curtain project any time soon, though.

Thankfully this weekend was not entirely lost to curtains. I discovered the joy of Dresden Plates on Friday. I'd resisted them for months but finally gave in and quickly made up three. I know loads more will follow. Here is one of them, no need to picture bomb anyone. 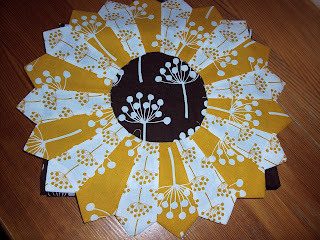 They're not finished yet because I need to decide on what to use them for. Pillowcases? Or make plenty more and make an appliqued blanket? I might have to buy some more plain fabric to play with. Either way, I've fallen in love. They're much quicker to make up than I'd anticipated and are so darned cute! I followed Sew, Mama, Sew's tutorial which has a template and is really easy to follow. I ironed all my petals after turning them so I would have really neat points and edges.